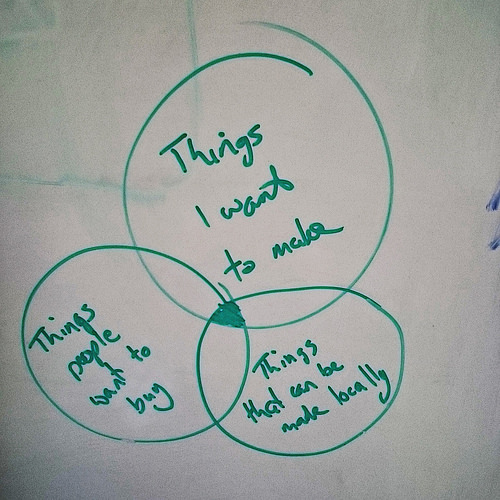 Early on in the project, Andy and I were discussing the issue of what product I should develop to take through to manufacture. As part of the research we want to take an actual product through the processes and supply chains we’re exploring. That will both check that the real willingness to deal with small-scale/inexperienced-in-manufacturing designers matches the theoretical willingness, and throw up challenges and issues that we wouldn’t find otherwise.

During that discussion I drew this venn diagram on the whiteboard. Our aim within the project (and to be fair, it’s pretty much the MCQN Ltd aim with all of our products) was to find something at the intersection of things I want to make, things that people want to buy, and things that can be made locally.

Before I get into unpicking each of those categories, I want to make a brief diversion into something that didn’t make the venn diagram.

In wider discussion about the project with James and Hannah at the RCA, we talked about the need for the product to be something useful.

That might not have been the exact term used, but the overall point was that the product should solve real problems. Stuff that matters. Nothing frivolous.

I understand—and agree with—the sentiment, but over the past eight years of working on hardware products I’ve found that it isn’t that simple.

MCQN Ltd’s first two product-ideas-that-made-it-to-prototype illustrate the difference nicely. Mazzini aimed to give you an itemised electricity bill to see exactly where your energy usage went; and Bubblino is a bubble machine that watches Twitter and blow bubbles when it finds a tweet you’re interested in.

Mazzini was the important, worthy product idea, yet after living with it (and additional, whole-house energy monitoring) for months I realised that I didn’t care about the data I was gathering. And if I—someone who’d learnt how to build circuits wired directly into the mains electricity in order to gather the data— wasn’t interested, trying to foist them onto everybody else would just result in me generating masses of e-waste.

For me to tackle climate change head on I’d need to find a better idea.

In contrast, Bubblino is very much a fun product. Initially conceived as a way to demonstrate the Internet of Things for a conference talk, it struck a chord. Eight years later they’re still delighting people, helping them better understand connected devices, and bringing brief moments of joy into their lives.

I’ve taken to using the categories listed by Bruce Sterling in his last viridian note when evaluating product ideas. Bruce defines four categories of objects: beautiful things; emotionally important things; tools, devices and appliances that efficiently perform a useful function; and everything else.

He frames them as ways to consider all your possessions as an individual when deciding what to allow into your life (and what to rid yourself of), but we can turn it round for the manufacturer too. You should avoid producing anything in the “everything else” category; the emotionally important isn’t for you to define; which leaves us with the tools, etc. providing a useful function and also allows items that are beautiful, and that enrich peoples’ lives.

We aren’t going to stop making stuff anytime soon, and people will always want ornament and aesthetically pleasing objects in their world. It is not enough for just the important, world-saving products to be built in a sustainable and ethical manner. We need to show how all products could be made this way, and make that the new normal.

Things I Want to Make

Which brings us to things I want to make.

With the variety of client work that MCQN Ltd undertakes providing masses of inspiration, there are no shortage of product ideas sat around at varying levels of development. Some are little more than random thoughts; some are sketches in my notebook or snippets of code that test the basic premise; others are background projects that are chipped away at when time permits and inspiration strikes; and some make it through to finished prototypes.

The purely software ones are the easiest to get finished and launched, but are also the trickiest to find business models for—especially given a dislike of advertising as a funding model and a geek’s aversion to the hard sell. Anyway, they aren’t relevant in a project looking at manufacturing…

Given my background, most of the rest fall into the category of connected devices, the Internet of Things. Not all though, some contain no electronics at all. They do tend to involve software somewhere along the lines though—in these cases it’s generally used alongside the recent possibilities with digital fabrication to enable mass-customisation or data-driven design.

In the connected device bucket, I’m less interested in sensors to automate and improve the efficiency of business, and drawn more to devices which imbue our surroundings with delight and help us escape from glowing digital rectangles. Trying to reconnect us with the physical world without disconnecting us from the online.

This is obviously an important category for potential products to fall under.

Given that connected devices, especially those aimed at non-geeks, are quite a new phenomenon I’ve found that it helps massively to have a physical prototype to show to people.

The process of developing the prototype gives you plenty of opportunities to share what you’re working on and discuss what people feel about it. With luck you’ll also gain some early orders.

Beyond that, we’re all still exploring what the market for the Internet of Things is going to be (rather than blindly accepting the wild predictions of the market analysts). That’s something that this project could really help—allowing makers to scale up more gradually will let them better match supply with demand.

Things That Can Be Made Locally

Here we have the meat of the research. How much of a product can still be made locally (when local isn’t the markets, workshops and factories of Shenzhen)? Are there different choices of materials which will alter the answer to that? Does manufacturing in the UK make products more expensive? If so, by how much?

So, out of all that thinking and possible avenues to explore, four likely candidates emerged. I’ll explain what they are, and how they stack up in the venn diagram, in the next blog post—and reveal which one we’ll be taking forward.